Academic introductions are awkward, especially if you’re a PhD student who’s still sussing out the nooks and crannies of their field – I only have the vaguest of ideas how to describe what kind of linguist I am*. I was at a morning tea a few weeks ago and we had to go around and introduce ourselves to new people in the department. I had to quickly compose a ready-made response and managed to fumble something out about working in Papua New Guinea and looking at social-y cultural-y things and how people speak differently even though they speak the same language. This isn’t the first time I’ve had to introduce myself, but the activity doesn’t get any easier.
I kind of see myself as a sociolinguist, but then since I work in “exotic” locations does that make my linguistics more anthropology-ish? There also happens to be (of course), a distinction between “anthropological linguistics”, and “linguistic anthropology”. This is confusing, because you wonder what exactly the difference is between the three.
So let’s walk through this and highlight the confusing parts, and I’ll come up with a simple answer that works (for me) for the time being (I think).

A sub-field of linguistics.

“Anthropological linguistics is that sub-field of linguistics which is concerned with the place of language in its wide social and cultural context, its role in forging and sustaining cultural practice and social structures….[it] views language through the prism of the core anthropological concept, culture, and, as such, seeks to uncover the meaning behind the use, misuse or non-use of languages, its different forms, register and styles…”  (Foley 1997: 3)

So according to Foley, anthropological linguistics is interested in the cultural and social meaning of language (as opposed to linguistic meaning in the sense Semanticists mean. I might talk about this some other time). A really simple example: what do we actually mean when we say the phrase “Yeah, right”? It could have a genuine or sarcastic meaning depending on the tone of voice you use, or the context. And what kind of a person do you imagine would use this phrase? Or when would you use it, if you are the kind of person to use this phrase? These are the kinds of things that are meant by “cultural and social meaning”.

But then you have…

Funnily enough, a sub-field of anthropology. As we mentioned at the very beginning, anthropologists are interested in holistic approaches. Anthropologists have various theories on what culture is, or what human nature is, and these things frame the way language is understood and studied.

“Linguistic anthropologists view language in its cultural framework and are concerned with with the rules of its social use.” (Salzmann 1998:16)

Which is, unfortunately for us, really close to what Foley said above.
Ok, so if linguistic anthropology is a subfield of anthropology, what makes anthropology different from linguistics? My really simple overview looks something like the following:
Anthropology
Linguistics
So maybe you can say something really simplistic like “an anthropological linguist is like a linguistic anthropologist in that they are interested in the social meaning of language, but the former being a linguist would place a fair bit of emphasis on linguistic structure (e.g. grammar).” Basically, a grammar nerd is still a grammar nerd even if they are interested in the human condition and social meaning.
Another difference that should really be pointed out is that of research method (i.e. how the research collects data). 20th century cultural anthropology is famous for its method of “participant observation“. For a good summary, I direct you to Kawulich’s paper over at Qualitative Social Research. The best summary can be found in Kawulich’s conclusion:

“Participant observation involves the researcher’s involvement in a variety of activities over an extended period of time that enable him/her to observe the cultural members in their daily lives and to participate in their activities to facilitate a better understanding of those behaviors and activities. The process of conducting this type of field work involves gaining entry into the community, selecting gatekeepers and key informants, participating in as many different activities as are allowable by the community members, clarifying one’s findings through member checks, formal interviews, and informal conversations, and keeping organized, structured field notes to facilitate the development of a narrative that explains various cultural aspects to the reader.” (Kawulich 2005)

Again, anthropological linguists do this too. I know for a fact that Foley of the Anthropological Linguistics section above has done years of fieldwork in Papua New Guinea. But I would hazard a guess that anthropological linguists, being grammar nerds and interested in linguistic structure, are more inclined to focus on specifics of grammar while using participant observation as a method as well. What do I mean by specifics of grammar? For example, a linguist might ask a question like  “what is the social meaning of using the progressive suffix /-ɪn/  in contrast to /-ɪŋ/?”. This is just a fancy way of saying “why do some groups of people say walkin’ as opposed to walking?” While I won’t speak for them, I hazard a guess that linguistic anthropologists might be more interested in something like “when and why do some groups of people speak the way they do, and what does that tell us about how this group of people view themselves and others?”.

A subfield of linguistics. Confusing, because as the name of this subfield implies, people who work in this field are also interested in social-y things, culture, and language:

“Is sociolinguistics about how individual speakers use language? Is it about how peoples language differently in different towns or regions? Is it about how a nation decides what languages will be recognised in courts or education? The answer is: yes, yes, and yes. Sociolinguists conduct research on any of these topics.” (Meyerhoff 2011: 1)

So what’s the difference between anthropological linguistics and sociolinguistics? Both are linguistics, so the practitioners are interested in grammar, right?

“Sociolinguistics…views language as a social institution, one of those institutions within which individuals and groups carry out social interaction. It seeks to discover how linguistic behaviour patters with respect to social groupings and correlates differences in linguistic behaviour with the variables defining social groups, such as age, sex, class, race, etc.” (Foley 1997: 3)

In other words, sociolinguists have a particular view and approach to language use, and what “social meaning” means. I think in the broadest sense Foely is accurate enough, but I have a problem with his choice of word “social institution”. This is because of how the field of sociolinguistics arose in the first place, but sociolinguistics has gone through a few different phases since Foley’s quote… but I’ll write about this some other time.

Notice that Foley emphasises the patterns and correlates where he doesn’t really attribute these kinds of things to anthropological linguistics. Sociolinguists emphasise collecting data in a certain way and running statistical analyses, seeking correlations and doing other number-y things.
So is it research method that makes sociolinguistics distinct from the other subfields? For now, let’s say yes.

For sure, there are plenty of people out there who borrow bits across the various subfields. For now I’m happy to settle on the understanding that the approaches and methods of the subfields are slightly different from each other, but the things that they are interested in studying are very similar. A difference in approach and method probably entails some difference in assumptions of the phenomena of language, culture, etc… but that’s a topic for another day.

So, does it matter?

I understand that labelling yourself isn’t necessary, and sometimes it’s a bad thing to pigeon-hole yourself by labels. Having said that, I kind of like that I can contextually myself in the field of linguistics and the social sciences I guess. Maybe in the future I’ll be more sure of what it is that I do and what questions I’m pursuing, but for the time being, labels help me!
eri
P.S. I was submitting an abstract for a conference paper recently and had to choose which category my talk would fall into. Lo and behold, there were the dreaded categories of “Linguistic Anthropology” and “Sociolinguistics” among others. In short, these labels do actually appear as something you have to deal with in a practical sense argh.
P.P.S A post by Piers Kelly explains Linguistic Anthropology as a practitioner, and why it’s important.
References

Heya, welcome to "Yammering On", a blog about doing sociolinguistics and fieldwork in Papua New Guinea. If this is your first time, check out the ABOUT page of this site. Enjoy! 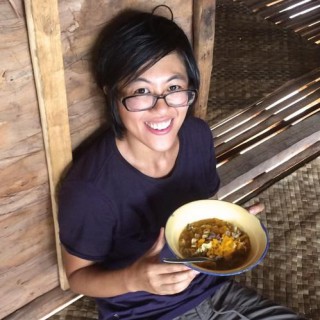 Eri is a linguist-in-training by day (and often at night) who does fieldwork in Papua New Guinea. By night she is an artist and is director of Veriko Operative Ltd.